EHR systems aren’t all that bad in theory. In fact, the concept of getting patient records into a digital format is supposed to make them more preservable, easily editable, more accurate, and efficient. Unfortunately, the software today only seems to meet three of those four targets. One study from 2015 indicated that despite about 85% of survey respondents reporting that they’re comfortable with technology usage, 74% of the group stated that their productivity while using an EHR system has worsened or stayed the same, with 46% definitively stating that productivity has decreased.

In order to determine how we got to this point, we can look at what doctors are actually happy with in regards to EHR. While these features aren’t enabling doctor productivity, doctors polled in an IDC Health Insights survey feel that EHR software does allow them to reduce the loss of patient data/charts, access those records remotely, and comply with incentive payment programs, like MACRA. While a reduction in record loss can be viewed as a productivity solution, neither of the other benefits have anything to do with productivity - in fact, remote record access just means that physicians end up bringing their work home and putting in additional hours outside of the office.

In the same IDC report, doctors listed out their top five uses for EHR:

If we break down these tasks into a couple of categories, we can see that they are Informative tasks, Billing tasks, and Data Entry tasks. For a system whose primary function should be to record and monitor patient data, there seem to be some extraneous features, don’t there? In an interview with Governing one physician stated that he found his initial experience resulted in a 25% decrease in productivity. “The primary function was to enhance billing, not to build a physician-patient relationship.”

Could it be that the EHR vendors are out of touch with what healthcare professionals are actually looking for in terms of documentation software? Andy Boyd, professor of health and information sciences at the University of Illinois at Chicago, admitted to Governing, “We are only in the early aughts of EHRs. We have a lot to learn.” We can see the early paths that EHR vendors were following for their systems, like Cerner Corporation’s PathNet, which focused on workflow automation and reporting for lab results, or Epic, whose early systems like Resolute Professional Billing were focused on payment automation within a healthcare setting. While these systems were developed and introduced decades ago, it indicates that even widely adopted EHR systems do not have doctor productivity in mind from a point of care standpoint.

Despite EHR’s negative impact on productivity, however, system adoption rates continue to rise in the U.S. as government regulations put the pressure on providers to maintain electronic records. The incentive payments provided by MIPS under MACRA are too significant to pass up, and they require digital documentation as part of their compliance mandates. The goal for the healthcare industry, then, must be to redesign the EHR software in order to improve usability directly in exam rooms.

Developers have begun to address this through the introduction of mobile EHR apps that are directly mapped to the underlying systems. By completely scrapping the EHR interface and replacing it with an intuitive mobile design, user experience becomes more of a “flow” of data entry, as opposed to a “stop-and-go” cadence associated with click gates innate to the EHR environment.

Mobile devices have become more and more integrated into healthcare settings, so optimizing the documentation process on these devices appears to be an inevitability. Since mobile is becoming ubiquitous, it can be assumed that healthcare professionals will be prepared and familiar with these devices in the workplace, thus eliminating any barriers to doctor productivity. To learn more about providers’ mobile usage, the possible challenges to its integration with EHR, and how vendors have begun to address those challenges, click here to download the free Ultimate Guide to Mobile in Healthcare. 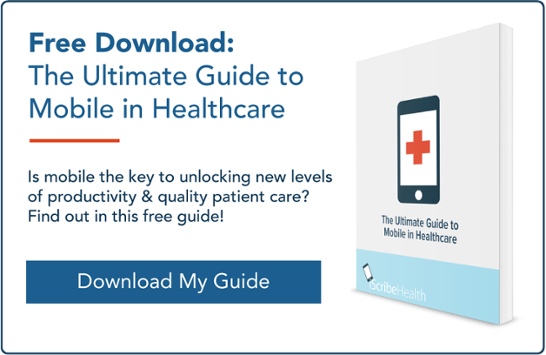 Next Turning Down the Volume: Emphasizing Quality Care Under MACRA Previous Introducing iScribe – The Steering Wheel For Your EHR

Fill out the form to get your free demo of iScribe, and see for yourself how iScribe will bring back the joys of practicing medicine, make your patients happier and healthier, and improve your practice’s bottom line.

Still have questions? Call us at

Design by Circa Design